Hi,
I am switching from Word to only office, as I have switched to Linux on my main daily driver and MS Office is an absolute nightmare on that OS. I am someone who uses the equation editor a lot. By a lot I mean I have written down my physics lectures in real time for the last 4 years.
Unfortunately the equation editor is effecively broken in version 7.2 (I have reported it and it will hopefully be fixed). 7.1 has quite a few bugs, so I hope 7.3 will be in a kinda usable state. Now to the list of features, of which some I was missing in MSOF:

Fast navigation with ctrl+arrow keys
It is nice to be able to skip over elements which are in a logical level below the one where the cursor is at. For instance a variable with an exponent or an index, a fraction or something in brackets. The Office 365 Version of Onenote was set up this way if you want to try it. Word didn’t have it. There I helped myself with crtrl + shift+ arrow key to mark an element within the current logic level and then another arrow key to deselect it and jump left or right of it. This workaround unfortunately doesn’t work in Onlyoffice.

Use same hotkey to switch out of equation mode
I have come acustomed to switching back to normal text using the alt+ hotkey. Mostly due to Word being a bit more stable with it’s Font selection. Word sometimes switched to italic when leaving an equation idk if that is also an issue in Onlyoffice.

Nicer way of entering matrices
This has always bugged me in Word. I usually didn’t do it by code but via ui. The code way is just too chaotic. Getting a 3 times 3 matrix right the first time is basically impossible. would be nice to have a \3times3 which inserts the empty matrix by default.

The lower brace is a very often used symbol and usually added after the line has been written. It would be nice to apply it the same way as \below works. (which is broken in 7.1, don’t know about 7.2)

Hidden limits of integrals, sums etc.
This is a nice feature Onenote had. Every sum and similar symbols had the text fields for their bounds added when there was none given with _ or ^. They were invisible when empty but accessable via the arrow keys. I they did it via a workaround and added a very narrow space there so the dotted square didn’t show up. This was very nice to have as it made sums more forgiving to typos.

Show the \-commands when hovering over the ui symbols
This is an absolute must feature imo. It is the same prinicple as showing the hotkey when hovering over any command in the ui. It makes learning how to use a program quickly much faster. I would consider this the main reason why learned how to write equations in Word and not give up due to frustration. Also it would be nice to have every \-defined symbol shown there. I suppose it would be sensible to split up the math autocorrect list into those categories so user defined symbols would also show up.

I think this is everything I have for now. I will continue using it and very likely find more bugs and ideas for improvement. I am also be willing to test prebuilds of the upcoming releases. What would be the easiest way of doing that?
Just generally I think it is amazing that this project bothered to implement this kind of equation editor. Imo it is superior to LaTeX when it comes down to speed and the learning curve. Unfortunately I never met someone in academia who was already using it. But I was able to convince a few people quite easily.
I would love to contribute actual code but unfortnuately my coding skills are more on the beginner level.

Sorry for the late reply.
Thank you very much for providing feedback and making suggestions. To successfully register them in our internal system please specify the product you are using. Is it Desktop Editors?

If it is possible please check how this works in version 7.2 and provide feedback. You can provide a detailed scenario so we can check it ourselves.

Show the -commands when hovering over the ui symbols

Could you please provide links to the description of these features from Microsoft official documentation so we can take a closer look on them?

Regarding the access to builds of upcoming versions - unfortunately, we are not providing such possibility but we are very thankful for your interest to the product and will be glad to receive your feedback after the official release.

Looking forward to your reply.

Hi Constantine,
thanks for the reply. Yes I’m refering to the desktop editor; forgot to mention that. I will try convey my points with screenshots of the latest only office version.

Regarding the lower brace: 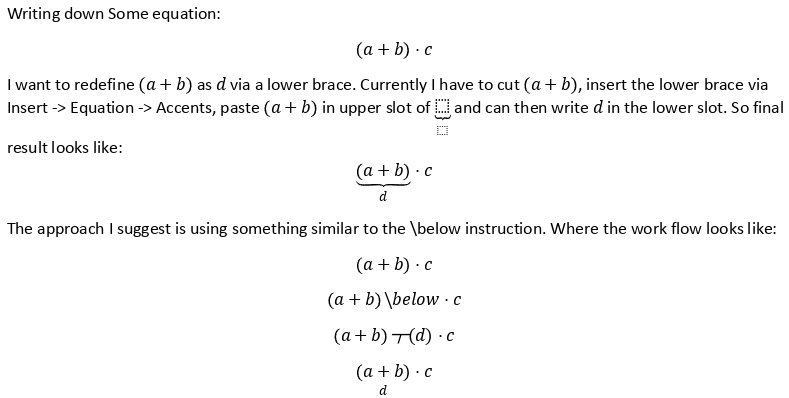 Regarding the hidden limits and the commands:
Unfortunately I am not familiar with the MS office documentation. Is this the correct link?

This reference is for experienced Office users who want to learn about VBA and who want some insight into how programming can help them to customize Office.

There I wasn’t able to find what I was looking for. Is it clear what I meant with those points or should I provide a sample document?

I’m starting to think short videos might be better to illustrate.

Is it clear what I meant with those points or should I provide a sample document?

Well, I don’t really see the way to achieve described scenarios of last two suggestions with VBA macros.
Actually, a video demonstration will help to understand for sure.

I hope this gets the Idea across 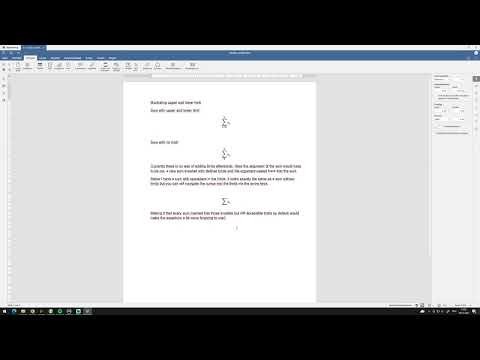 Thank you very much for interesting our editors and creating suggestions to make them better.

We are analyzing received from you information already.
I will let you know the results.